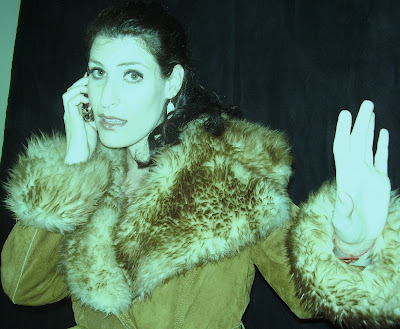 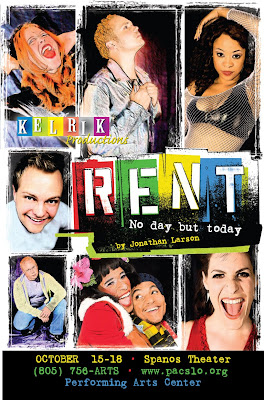 (CLICK TO ENLARGE)
This much-loved musical comes to the Spanos stage on the heels of one of the longest runs in Broadway history, and will open Kelrik Productions 2009/2010 "Breakaway" Season, performing October 15 - 18 at the Spanos Theater.

RENT is a contemporary rock opera with music and lyrics by Jonathan Larson based on Giacomo Puccini's opera, La Boheme. It tells the story of a group of impoverished young artists and musicians struggling to survive and create in New York's Lower East Side in the thriving days of Bohemian Alphabet City, under the shadow of AIDS. This life-affirming musical tells the unforgettable story of a group of young artists learning to survive, falling in love, finding their voices and living for today. "That we are among the first to be offered this opportunity is truly exciting," says Artistic Director Erik Austin. "We are thrilled to be the first to offer RENT to our local community, a musical that celebrates love, diversity and the power of friendship." The original Broadway production earned a Tony Award for Best Musical and a Pulitzer Prize for Drama. The exuberant rock score remains among the most musically beloved in recent Broadway history: "Light My Candle," "You'll See," "La Vie Boheme," "Goodbye Love" and the show's signature "Seasons of Love".

James May plays the role of Mark Cohen, a struggling documentary filmmaker and best friend of Roger Davis, an HIV-positive musician recovering from a heroin addiction played by Davis Marchesano. Dominique Paton is Mimi Marque, a sexy HIV-positive stripper and dancer who is also a heroin junkie and Roger's love interest. Dana Shaw plays a spunky performance artist Maureen Johnson, Mark's ex-girlfriend and current girlfriend of Joanne Jefferson, a tough, headstrong Harvard-educated lawyer played by Alissa-Nicole Koblentz. Tom Collins, an HIV-positive philosophy teacher, friend and former roommate of Roger, Mark, and Maureen is played by Davis LaMarr. Jacob Nixon is cast in the role of Angel Schunard, an HIV-positive Drag Queen with a heart of gold and Tom Collins' love interest. Benjamin "Benny" Coffin III, played by Jeremy Fillinger is the former friend and landlord of Mark, Roger and Mimi's apartment.

The musical was first seen in a sold out, limited three-week workshop run at the New York Theatre Workshop in. This off-Broadway theatre was the musical's initial home for its official January 25, 1996 opening. Tragically, the show's creator, Jonathan Larson died suddenly in the early morning of the off-Broadway premiere.

RENT is the seventh longest running show in Broadway history and grossed over $280 million during its Broadway run. The musical has been translated into every major language and been performed on six continents. Over the course of its groundbreaking 12-year New York run, RENT transformed the definition of musical theater - and changed Broadway forever.

The mission of Kelrik Productions is to educate and provide quality theatrical experiences for performers through the production of shows, expanding to include those with contemporary social relevance.

Kelrik Productions is presenting the full and uncut version of RENT October 15 - 18, 2009 at the Spanos Theater, 1 Grand Ave in San Luis Obispo. Tickets are $20- $27.50.Reservations can be made through the PAC Box Office: 805 756-ARTS or purchased online at http://www.pacslo.org.
RENT has changed Broadway forever and transformed how a generation feels about musical theatre. Whether it's your 1st or 100th time, you won't want to miss this production of RENT.

Kelrik's RENT LOTTERY tickets and how it works?
A select number of front row orchestra seats will be on sale for $20 per seat on the day of each performance. Kelrik will conduct a lottery make the tickets available via a rush policy (first-come, first-served). There is a limit of two tickets per person, cash only, and these tickets will be sold one hour before performance time. The producers wanted to make good seats available to those who otherwise can't afford them. Jonathan Larson, Rent's creator, was a struggling artist who wanted to make theatre accessible to everyone.

Kelrik Cares
Help us support The AIDS Support Network
Kelrik Productions is excited to partner with The AIDS Support Network (ASN), a United Way Partner Agency, founded in 1984 by a small group of county residents as a grassroots response to the AIDS pandemic. ASN remains the sole community based, non-profit organization in SLO County that provides supportive services to residents living with HIV disease and AIDS, their families and their friends. The agency strives to improve the quality of life and independence of its clients by providing support on an individual basis. At each performance, cast members will provide educational brochures and AIDS Support Network information as well a ribbons to show your support. All money donated to ASN stays in SLO County, helping residents of this county in their struggle with HIV disease and AIDS. The support of individuals and businesses is vital to the continuing ability to provide comprehensive services to growing number of clients.