Spring Awakening has been a dream come true. I couldn't have asked for a more magical experience.Thank you to glory|struck for this incredible opportunity. 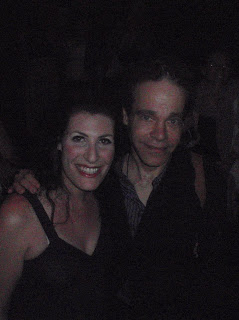 Once in a lifetime opportunity to meet the writer himself Steven Sater. He attended our show closing night. 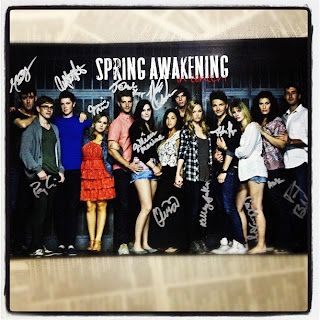 Autographed poster for our fans. 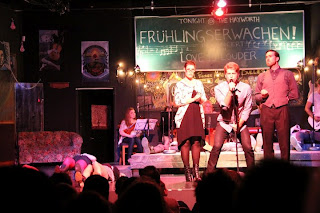 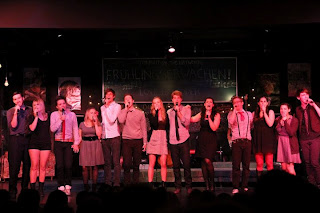 The Song of Purple Summer. 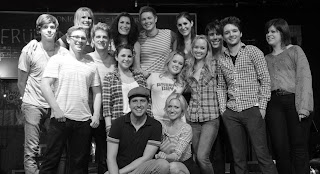 Spring Awakening Cast with Brittany Snow and Courtney Knowles of Love is Louder. 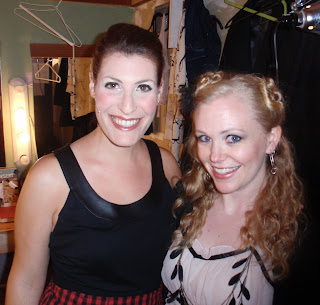 With our conductor and my dear friend Rachel Howe. 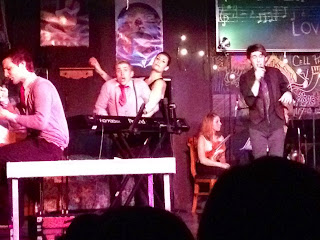 Touch me with Payson Lewis. 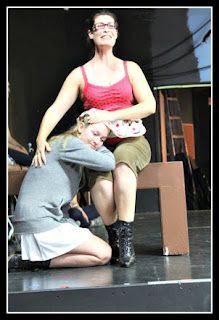 "The Stork" as featured on Playbill.com 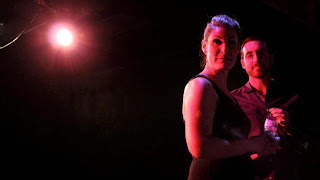 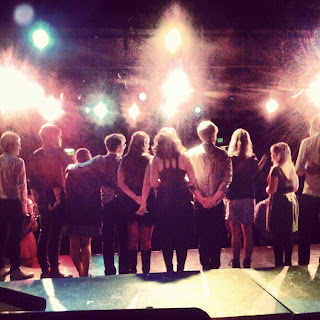 No simple live recreation of the musical’s cast recording, Spring Awakening In Concert gives audiences the entire Broadway show including dialog—but with a focus on the music this time round. Contemporary outfits replace the 1890s+2000s Broadway mashups, and “movement” takes the place of Bill T. Jones’ choreography. Blocked somewhere between a concert and a theatrical production with a live eight-piece onstage orchestra backing a cast of a dozen of the best vocal talents in town, Spring Awakening In Concert will hold you spellbound from the first notes of “Mama Who Bore Me” to the final chords of “The Song Of Purple Summer.”
For those who may not be familiar with the musical adaptation of Frank Wedenkind’s groundbreaking 1891 drama, the original German play broke plenty of ground indeed with its depiction of on-and/or-offstage masturbation, child abuse, bondage, rape, abortion, and suicide among 14-year-olds just now awakening to their sexuality.
Sater and Sheik’s musical adaptation follows Wedekind’s storylines, though thankfully not too much to the letter. There are its two teen heroes, the handsome, popular, self-confident Melchior (Jonah Platt) and his introverted, inhibited, wet-dream-plagued classmate Moritz (Topher Rhys), and its heroine, the all-too-innocent but no less sexually inquisitive girl-next-door Wendla (Kelley Jakle). Surrounding the trio are Melchior and Moritz’s ever-horny classmates and Wendla’s equally randy girlfriends. A pair of more seasoned actors (Paul T. Brindley and Alissa-Nicole Koblentz) stand in for all the adults in these teens’ lives.
What makes Spring Awakening work so brilliantly is not merely Sater’s streamlining of Wedekind’s melodramatic plot threads, though an effective streamlining it is. Far more important to the musical is singer-songwriter-pop star Sheik’s catchy alternative rock score, the likes of which has probably never before been heard on a Broadway stage.
Like its New York and Hollywood predecessors, Spring Awakening In Concert begins quietly, with sexually burgeoning Wendla wondering if she’ll ever be told the truth about man-woman relations in the acoustic “Mama Who Bore Me,” followed by a very funny sequence in which her highly embarrassed mother (Koblentz) avoids the question entirely, an omission which proves ultimately disastrous. The song then takes on a rock beat as Wendla’s girlfriends Anna (Jamie Lee Barnard), Martha (Olivia Noelle), and Thea (Jilli Marine) join her in a reprise, mikes in hand. Without missing a beat, we’re transported to Melchior and Moritz’s Latin class, where the former is attempting to rescue the latter from the ire of their monster of a teacher (Brindley). Suddenly and without warning, the burning need to express what’s going on inside the teens’ minds and bodies erupts into “The Bitch Of Living,” a rock-n-roll expression of the adolescent rage felt by Melchior and Moritz and the equally pissed off Ernst (Anthony Starble), Georg (Payson Lewis), Hanschen (Nathan Parratt), and Otto (Michael Christopher Luebke).
And this is only the begging of a musical/rock concert that works equally well in its quieter moments, which also feature some of composer Sheik’s and lyricist Sater’s most memorable compositions. The Pink Floyd-esque “Touch Me,” in which the youthful cast of characters express their desire for intimate physical contact; the anthem-like “I Believe,” which sets the stage for Melchior and Wendla’s sexual flowering, and the exquisitely sad “Left Behind,” sung at a funeral for one of these teens, are just three among many such songs. 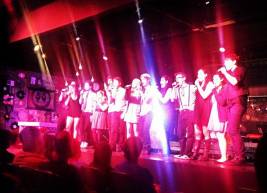 The original Broadway production emphasized the contrast between these young people’s late 19th Century lives and the 21st Century music that took control of their bodies whenever hands got hold of wireless mikes, whether pulled from inside their school uniforms or handed to them by fellow students. Spring Awakening In Concert has a more contemporary feel from start to finish, but is no less powerful, particularly since you’d be hard-pressed to find a more vocally gifted cast backed by a more musically gifted bunch of musicians that those onstage at L.A.’s historic Hayworth Theatre.
Director Kate Sullivan Gibbens deserves major snaps for making Spring Awakening In Concert uniquely its own show while at the same time remaining faithful to the source material.
Since this is a contemporary rock concert, performers use hand mikes even during most dialog scenes, though they are also head-miked as well. One particularly effective “microphone moment” has Wendla encircling Melchior’s hand with her own, even as his hand encircles his ever-present mike. The boys in Latin class write in modern notebooks with ballpoint pens rather than the original’s slates and chalk. Melchior occasionally picks up a guitar or accompanies himself on keyboard, as do a couple more of the boys. And though musical numbers aren’t “choreographed” per se, there are plenty of rock concert moves that come close to dance in numbers like “The Bitch Of Living” and the Act Two showstopper, “Totally Fucked.”
Since Spring Awakening In Concert has been cast primarily with singers and singer-songwriters as opposed to the usual musical theater triple threats, it’s hardly surprising that vocal performances are as exciting as it gets, from Jakle’s exquisite “Mama Who Bore Me” and “Whispering” to Platt’s heart-stirring “All That’s Known” and “Mirror Blue Night” to Rhys’s pulsating “And Then There Were None” and achingly powerful “I Don’t Do Sadness.” As Ilse, the town runaway, Caitlyn Ary brings her big smoky vocals to “The Dark I Know Well” alongside Noelle’s own set of power pipes, then returns for an unforgettable “Blue Wind.”
Other vocal highlights include the full cast’s catchy “My Junk” and ethereal “Touch Me,” Parrett’s and Starble’s touching “The Word Of Your Body (Reprise),” and “Those You’ve Known,” performed to tear-inducing perfection by Rhys, Jakle, and Platt.
Yes, indeed, these are some of L.A.’s finest singers, a number of whom have competed on NBC’s The Sing Off or The Voice or on Fox’s American Idol or performed at The Roxy, Whisky-A-Go-Go, or other Los Angeles rock or cabaret venues. It’s an unexpected treat, therefore, to find out what fine actors most of them turn out to be. Platt, for example, captures both Melchior’s swagger and his heart, while the terrific Rhys gives us a Moritz who is less flamboyant than usual, but one whose internalized pain is no less palpable. Lewis reprises the role of Georg from the Hollywood production, and he is once again a charismatic standout. I loved Brindley’s and Koblentz’s somewhat broader than usual but no less effective takes on the adult characters. As for Parrett and Starble, the duo are the first I’ve seen who play Hanschen’s seduction of an eager-to-be-seduced Ernst precisely as it should be played, as a very real connection between two very real boys and not as comic relief.
Luebke doubles, sensationally, as music director. Vocal director Rachel Howe conducts a couldn’t-be-better octet of musicians—Alex Seller on lead guitar, Eric Schackne on piano/keys, Adam Stackpole on guitar, Bob Gallagher on bass, Fernando Rensi on drums, Jeness Johnson on cello, Morgan Paros on violin, and Shanon Michelle on viola. Sound designer Drew Dalzell and mix engineer Sean Kozma deserve highest marks for the production’s just-right sound and mixing.
Scenic designer Carlo Maghirang has created a rock concert-ready set, the Hayworth’s black walls covered with chalk graffiti and drawings, vinyl LP, posters, and a great big green chalkboard which reads Frühlingserwachen In Concert. Josh Holt’s excellent lighting design both captures the feel of a rock concert and ups the dramatic power of the story being told. Kudos go also to wardrobe stylist Sara Stuhl. 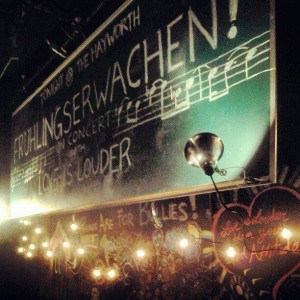